The exhibition’s title, Once I Had…, refers to the transience of possession, convenience of over-consumption and other self-destructive implications of human behavior on the future of Earth.
Once I Had.. is a conceptual continuation of Britta Benno recent solo exhibition „Dystopic Tallinn“. In this project the apocalyptic landscape scenery is site-specifically depicted with the Mustamäe district’s panel houses, as they are located in the vicinity of the artist run-space Kraam.
Benno invited American artist Heather Beardsley to this project, as they met while during an artist residency in Vienna, where they were coincidentally both depicting dystopian landscapes. The works relate not only through imagery, but also materially and technically. There are many common links between the two artists: Benno and Beardsley both use nostalgic found objects, collage-like layering, printmaking and transfer methods, and inconvenient materials combinations. Benno draws, prints or animates water or fire on her dystopian landscapes, Beardsley sews or embroiders volumetric flora on top of photographic cityscapes.

Benno:
„Life in Mustamäe has been lasting for thousands of years. /…/ It has been digged up pieces of undecored cheramics from the dune sand, that has came probably from aboriginal campfire site.“
Once I had a flat in Mustamäe. In the far distant posthuman future the only reminder of this once safe urban district are sparsely scattered panel houses. The Mustamäe territory has transformed into a dreamy mountainous landscape. Future creatures use the blockhouses as shelters.
And the Earth is on fire. My installation is a mix of the future fiction and present living – worrying of the crackling disappearance of healthy living environment. The Amazon rainforest is burning, Siberia is burning, the climate is warming, the ocean is acidifying, the news is becoming ever more alarming.
But watching an open fire is calming. Campfire gives warmth and light. A fireplace is a safe place in the middle of a dangerous forest as the flat in Mustamäe is a nest to hide in the middle of horrible world.
There is even a special TV-channel dedicated to a fireplace.
All-burning fire is eternal, beginning and end.
With an installation combining drawing straight on a wall and an animation I experiment the peripheries of visual art mediums, constructing layers over and above each other as printmaking layers. Orchestra of objects, sound, wall-drawing and flat-animation projection performs another etude of apocalyptic urban landscape. This time Tallinn burns.

Britta Benno is a drawing and printmaking artist living and working in Tallinn. She is interested in various techniques and materials and the new perspectives that appear when they are contrasted and combined. Currently, she is studying for a doctorate at the Estonian Academy of Arts, her PhD-in-Practice research is about Estonian contemporary women printmakers: spaces, mediums, identities. www.brittabenno.com
Beardsley:
In December 2017 I visited Pripyat, witnessing how over the past thirty years since the man-made disaster, the Chernobyl meltdown, nature has grown up to dominate the man-made structures. I began to embroider photographs of the city with plants overtaking the people and buildings. Over the past year and a half, I have added images to this series with each new city my art has taken me to, including Budapest, Vienna, Beijing and Kyiv. Although presented in a whimsical fashion, using an intimate scale and a “feminine” craft technique like embroidery, on closer examination the implications of these pieces become more sinister. As plants seemingly grow uncontrollably through the buildings and streets, people are either absent or oblivious to the situation. Viewers are left to wonder about this change in dynamic, what preceded it, and what will prevent it. The resulting works exist in an ambiguous space: a shift in the dynamic has clearly occurred, but nature has fought back and new life has grown from it.
For the work in this exhibition, I have added images of Tallinn to this series, but also expanded it by adding architectural imagery and plant embroideries into found embroidery on traditional Estonian linens. These linens evoke domesticity and the feeling of home, heightened by their installation in relation to an armchair and coffee tables, re-creating a living room tableau. Yet the apocalyptic imagery depicted on the textiles creates a dissonance which, combined with the absence of actual people in the scene, that raises unsettling questions about what happened to the former residents. The installation’s placement opposite the dystopian animation by Britta Benno heightens these feelings, the burning sounds coming from the speakers that could create a feeling of comfort and nostalgia while looking at the domestic scene, become more ominous as one turns around to see housing complexes on fire. Does this scene represent the last vestiges of a lost society about to be permanently erased by the inferno outside?
Heather Beardsley is an American visual artist. In 2016-2017 she was awarded an International Artist Scholarship by the Ministry of Science and Culture of Lower Saxony, Germany. She received her MFA from the School of the Art Institute of Chicago in Fibers and Material Studies in 2015. She has exhibited work throughout the United States and Europe, as well as the UK, Austria, Germany, and Slovakia. www.heatherbeardsley.com

The exhibition and Kraam artis-run space is supported by the Cultural Endowment of Estonia. 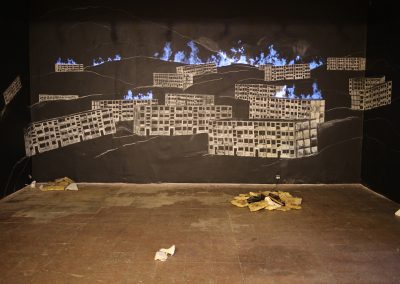 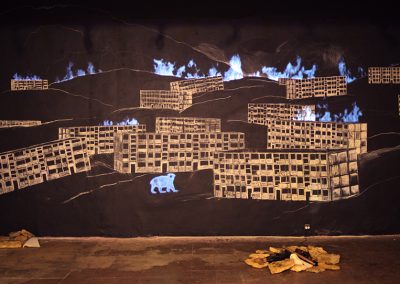 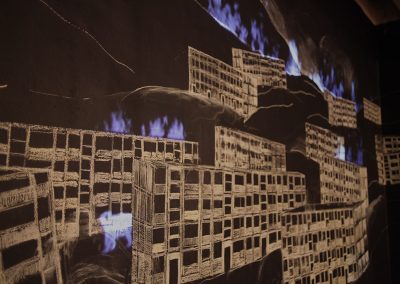 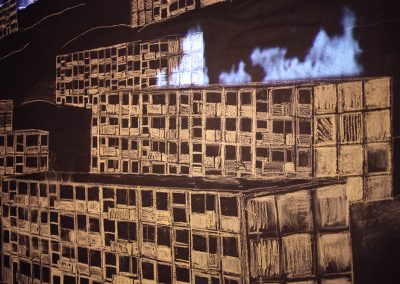 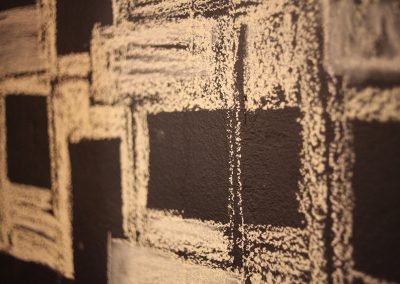 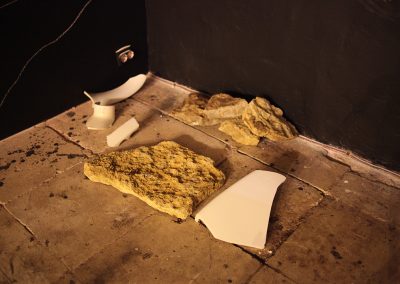 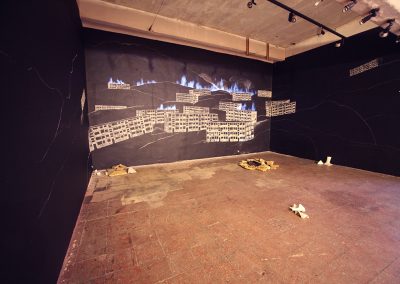 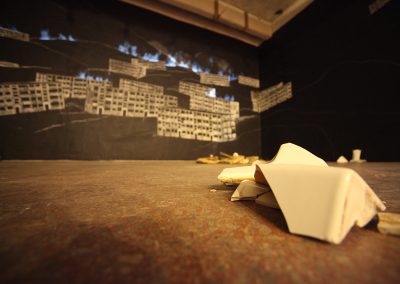 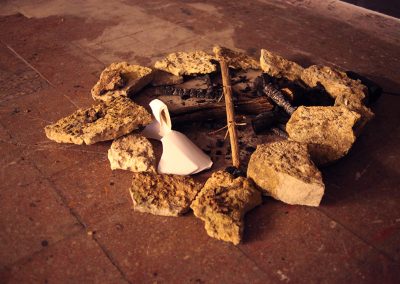 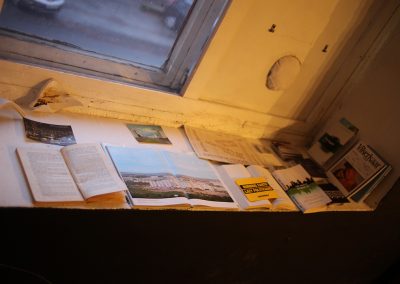 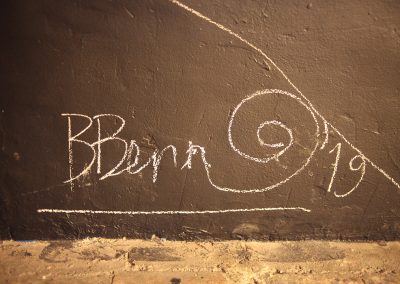 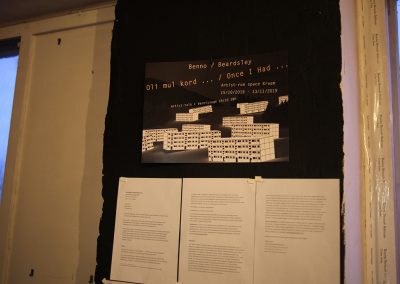 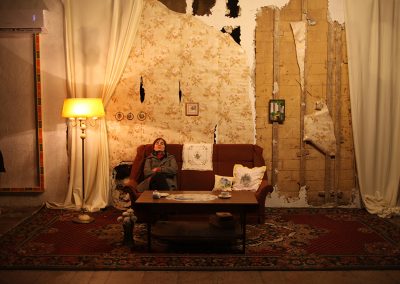